Raquelle is Barbie's friend/frenamy and is often the villain in Barbie products. She was released in 2006.

Always hungry for fame, she'll do anything to steal the spotlight! Can she form a friendship with movie star Barbie?

In The Barbie Diaries, Raquelle was friends with Dawn and Ragan.

Raquelle is Asian and has brown eyes with black hair. (However, in some dolls and pictures of Ryan, he is seen with brown hair) She is often jealous and spiteful. In the Barbie Diaries, she was the most popular girl in school and adored by everyone. In Barbie: A Fairy Secret, she was rude to Barbie but in the end, they became friends because Raquelle apologized and explained she was just jealous. In Barbie: A Fashion Fairytale, Raquelle (successfully) attempted to break Ken and Barbie up.She is evil.

In Trapped in the Dreamhouse, Raquelle banged on the Dreamhouse door, yelling 'I want to go stop Barbie and feel good about myself for once in my life!!'

Raquelle is not currently in a relationship, but does have a crush on Ken, seen in many Life in the Dreamhouse episodes, such as Playing Heart to Get and Stuck with You. In 2006, in The Barbie Diaries, Raquelle was going out with Tod. 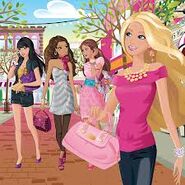 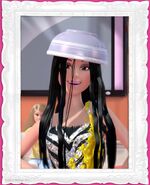 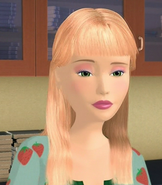 Add a photo to this gallery
Retrieved from "https://everything-barbie.fandom.com/wiki/Raquelle?oldid=7474"
Community content is available under CC-BY-SA unless otherwise noted.