Everything Barbie Wiki
Register
Don't have an account?
Sign In
Advertisement
in: Barbie: Life in the Dreamhouse Characters, Dolls, Products,
and 6 more

Midge is a quirky, nerdy, smart and socially-aquward friend of Barbie's. She dresses vintage and uses old-fashioned phrases, such as 'groovy,' 'what a bunch of cream puffs,' etc..

She is from Willows, Winscosin, where Barbie grew up. They were neighbours and their families were very close. After Barbie moved to California, they drifted apart.

In 1991, Midge married her boyfriend, Alan Sherwood, who was introduced in 1964 to be a friend of Ken. In 2003, Midge and Alan were shown with a little boy named Ryan. It was not confirmed his age, but if you compare his height to Chelsea Kelly Roberts then he looks about three or four years old.

Midge also got pregnant with another baby named Nikki. On Nikki's first birthday, she recieved a dog, which was left unnamed. In shown in the photo album that came with the basic Midge doll, one of photos shows a third child, still a baby. The baby's name turned out to be Cassandra.

In 2013, Midge moved to California. She made no mention of Alan or her children, so it is assumed that they were discontinued completely as parents complained, stating that Midge was too young to be a mother. In Everything Barbie Wiki, we are going to say that they broke up and Alan is caring for the children.

A few Midge dolls are listed below: 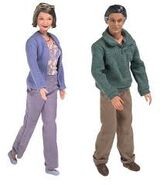 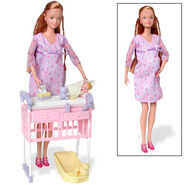 Midge with Nikki as a baby / Pregnant Midge

Community content is available under CC-BY-SA unless otherwise noted.
Advertisement